Soul of the Fire

In this piece I wanted to bring the grandeur and natural wonder of Yosemite National Park to mind, but I didn’t want to simply paint Yosemite. The great paintings of Bierstadt were a roadmap for me in this case. He managed to capture the majesty that flows from Yosemite and put his own unique stamp on it. While I wanted to capture a similar magic, my challenge was to make it a new place, unique for the story. Eh, easy…Right? Ri-i-i-i-i-i-ght.

“The first step was to break the boundaries of traditional fantasy cover art. The result was the startlingly beautiful cover for SOUL OF THE FIRE. While it was unlike typical fantasy art, it maintained conceptual elements that linked it to fantasy. The setting was wooded with a romantic glow. But, unlike fantasy art, it revolved around two people, while at the same time moving more toward fine art.”

Soul of the Fire 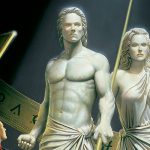 Faith of the FallenBook Covers 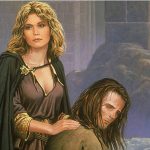